When I started this morning, and the forecast was for some rain and strong winds, I knew this might be quite a long 'roadie' day, without too many stops, and I had Manapouri or Te Anau in mind as an endpoint. But true to form, my actual route meandered and criss-crossed all over the place.

I left Pounawea early, and took the road for Balclutha. There I found the Spark shop, and uploaded my blog posts. I saw some very stylish shops nearby, all still closed, possibly fortunately! 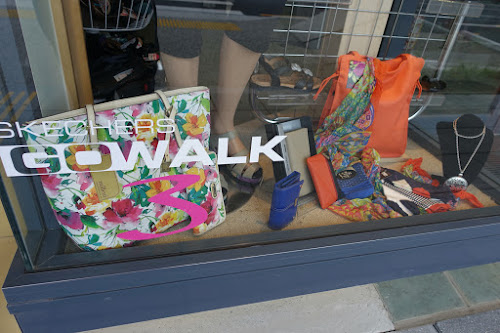 This shop window reminded me of things I saw in Italy last spring, and when I looked more closely, items in here were made by an Australian company, but with an Italian 'i' on the end.

I headed across the inland part of Otago, which then turned into Southland, passing through Clinton, Mataura and Winton. By this time the weather had turned quite cold, and it was often raining. The countryside was rolling and lush, and there were many sheep, and much evidence of hay-making.

One surprise along the way was this Glencoe monument, a memorial for the McDonald clan massacre in Scotland in1692. This is not something you come across typically in rural New Zealand. 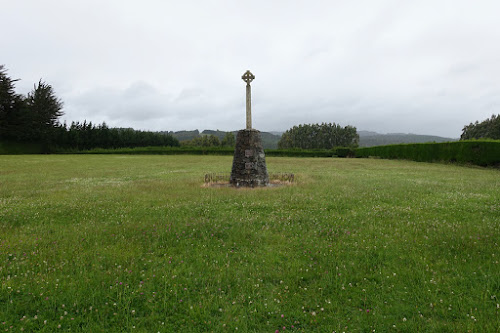 My plan was then to head a bit further north to Dipton, to see if I could find where an old friend and mentor grew up. I was given some clear directions by a kind, local man but typically, I got lost. In fact I twisted and turned around corners quite randomly in the end, and lost all sense of direction. So after a couple of attempts, I just took some photos of the general area. 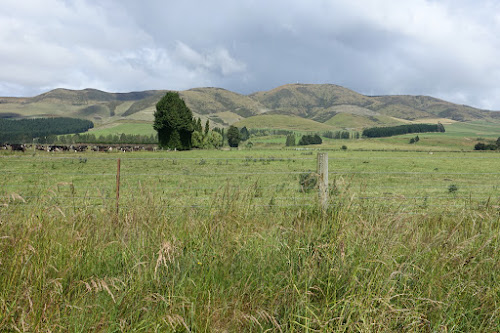 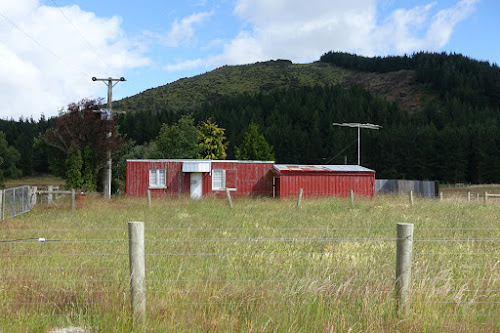 It had been my intention to drive straight south to Invercargill from here, but I was beguiled by the mountains I could see in the distance, 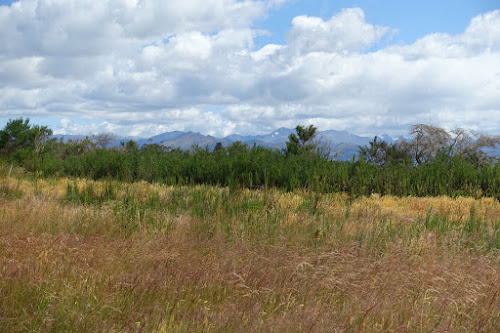 and so headed towards Mossburn. Here At Backen Hall I had a delicious home-made vege soup. But when I saw the lady doing a venison stew for pies, I nearly had one of those as well! 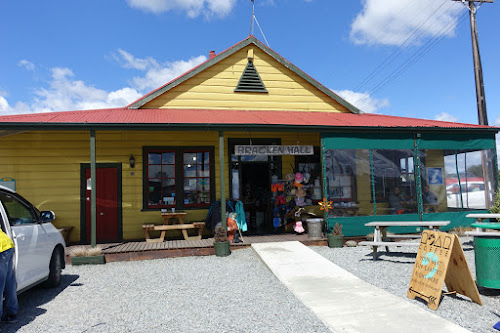 And here is the little Mossburn Catholic Church, that tells a tale of a different era. 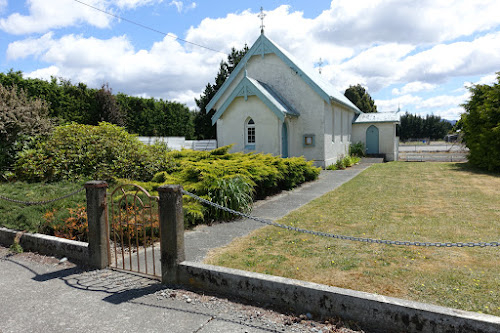 It would have been 'sensible' to take the shorter route from Mossburn directly to Te Anau, but I had a yearning to see the coast down this part of Southland. The weather at first was quite reasonable as I journeyed down a valley where lots of haymaking had been going on. 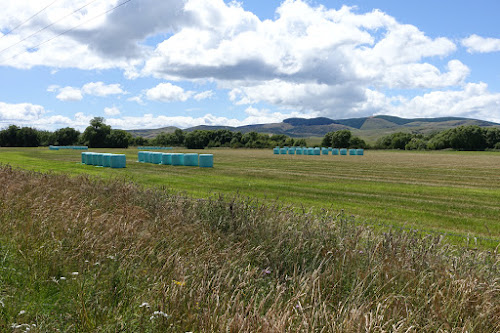 I passed through Nightcaps, where this old coal miner's cottage has been restored. 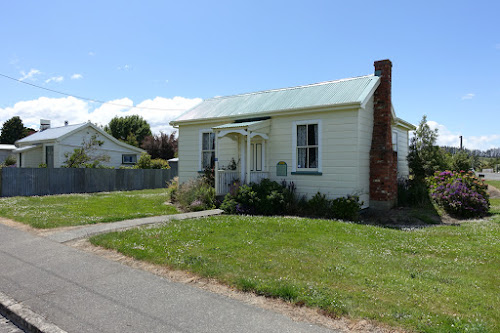 After that the weather deteriorated, and I passed through Otautau and Riverton without stopping to do much other than get petrol. Here are the whitecaps at Riverton! 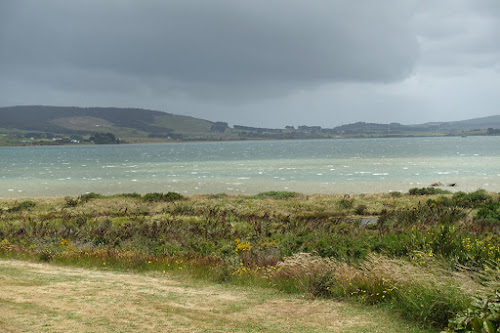 The journey up the coast towards Tuatapere became quite scary in the strong wind and intermittently heavy rain. Fortunately, when I reached a lookout, the rain eased. How angry the sea had become! 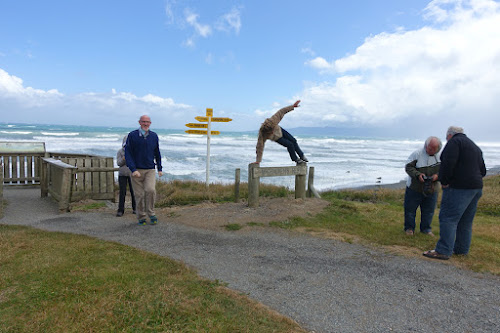 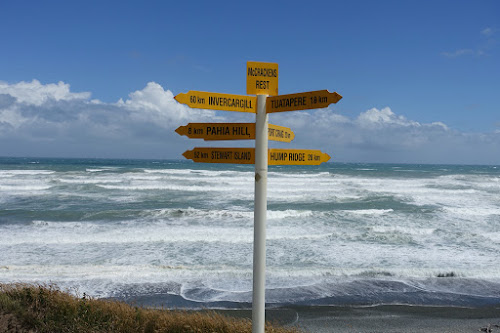 There were lots of 'sideways' trees along this coastal stretch, nearly as slanted as those at Slope Point, so I guess this region breeds some hardy souls!

The weather eased somewhat once I reached the 'shelter' of the mountains, away from the coast.

I had rung from Mossburn to book a cruise down Doubtful Sound for tomorrow- gulp at the price, but my friends sang its praises. So I was hoping to find a place to stay in Manapouri, where the cruise starts, preferably a cabin if the wind and rain were to continue. Bingo, I was in luck, and have a cute budget cabin for two nights. The bedspreads are exactly the same as I had as a child, same colour and all. And though you can't really see, the carpet is exactly the same as the old carpet I had at my house. So I feel quite at home. 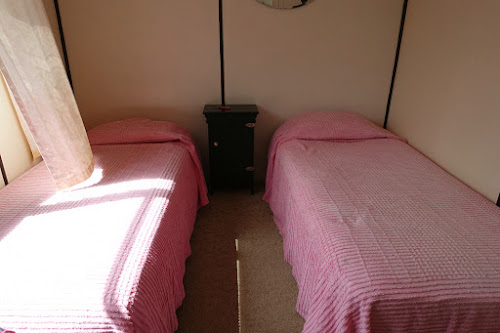 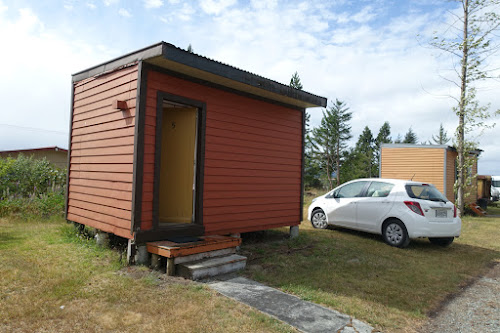 I even get a bit of a view of Lake Manapouri from my window, and an even better view from just across the road, with the mountains under misty cloud. 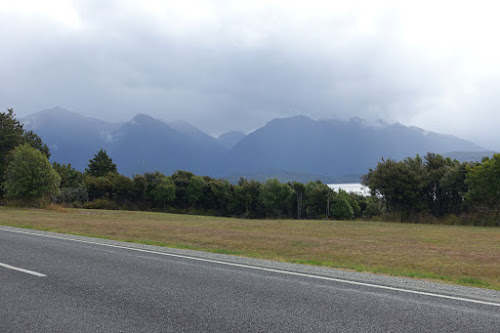 So, roll on the morning, and I await tomorrow's weather with a very earnest interest!

Posted with Blogsy
Posted by Kiwi Nomad at 15:37