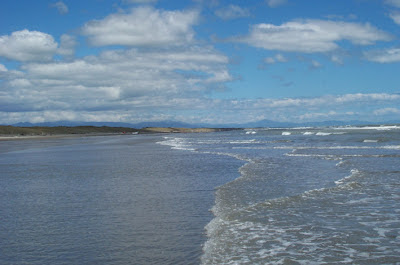 Have just been delving into Lecture 2, about concepts of biodiversity, by Dr Ian Henderson. Clever man demonstrated all these concepts by relating them to our closest local beach, Himatangi, which is a long, sandy surf beach. As he described, there isn't much variety of habitat there to support different kinds of shellfish.

Anyhow, there are four components to think about when you think about biodiversity: richness, equitability, disparity and endemism. And the upshot of having such a long uniform beach, is that there is low richness, i.e. only a few species are present. There is also low equitability on this beach, as 95% of the shells you find are the one species, Spisula, so the next shell you see tends to be the same as the last. Disparity is all about having more species, and the species being more different. You need to find a beach with more rocky pools etc to find that. But.... the last concept, endemism, Himatangi has more of (I think, if I read it right!) Turns out that some of the bivalves we find very commonly on our beaches are actually endemic, and found only in New Zealand.

I still love Himatangi though! Biodiversity may be low, but I am a "West Coast beach" girl, born and bred by the coast in Taranaki. And there is nothing I like better than long walks along this sandy beach, listening to the sounds of the surf and the gulls, and feeling the wet sand between my toes.
Posted by Kiwi Nomad at 10:37 3 comments:

The Pohangina Valley is a well-kept Manawatu secret: it is a lovely place to relax and spend time. Today there was an easy tramping club trip along the Beehive Creek Walkway. Civilised start time: 9am meeting at Foodtown Carpark. Eleven of us to spend the morning together. Someone else I hadn't seen for years on the trip. 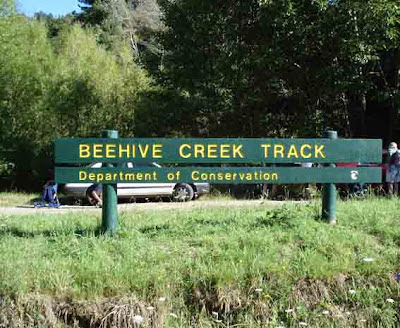 We started off with 2-3 kilometres of walking along the gravel road to the other end of the walkway - so we could 'save the best bit of the track until last'. The road was very peaceful on this lovely sunny Sunday summer morning, and only one vehicle passed us. 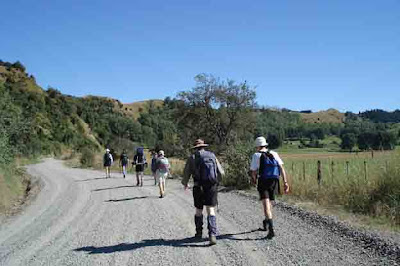 The first bit of the track involved climbing up to the top of a ridge. I was slow, but I have done this before in recent weeks, so it wasn't too bad! We had great views at the top, then we descended a steep wee hill to get down to the stream. All the last part of the walk involved walking along the streambed. The water was surprisingly warm and pleasant. 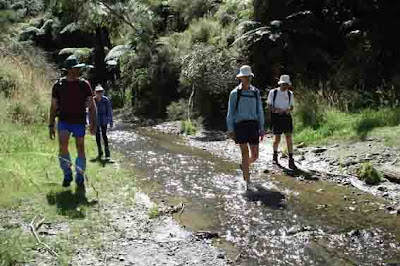 We ended our time out with some cafe crawling, not that we had intended that. First we called into the nearby Waterford, only to find it was crowded on this very sunny and pleasant Sunday lunchtime, with a jazz band playing outdoors. We decided not to wait, and headed for the Herb Farm, by this time feeling very hungry. It was, if anything, even more crowded! So we returned to Ashhurst and went to the Domain Cafe. By this time the lunchtime crowd had thinned. I had a scone smothered in cream and a hot chocolate. So much for the health benefits of tramping!!!! Thanks PNTMC for another day of great walking and good company.