Today was a bit of a 'wind down' day, and I never ventured far from Hokitika, though I still seem to have a heap of photos! It was a drizzly rainy kind of morning to start with, which gave me an excuse to stay in my tent for far longer than normal, reading and dozing. Then I headed off into town to look at the shops, a 'first' for this holiday...

First place I passed was the Catholic Church, which catches the eye as you drive through, but it has actually been closed for several years because of the earthquake risk it poses. 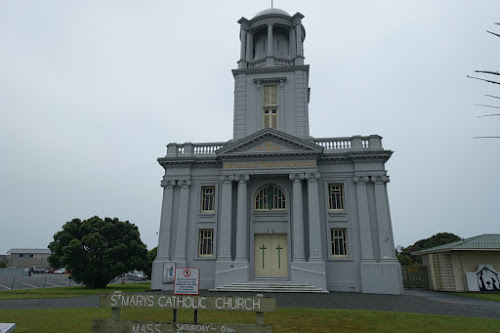 As I walked down a street in Hokitika I noticed some random greenstone paving. If you've got it, flaunt it I guess! 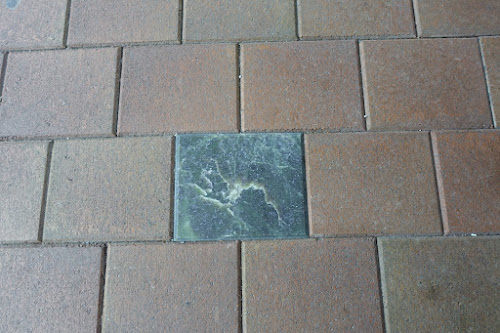 I walked around a bit of the historic Quay, and saw the old Custom House. 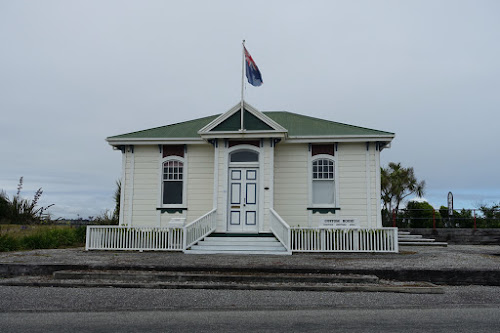 And the bridge stretched across the river, wide like so many of these rivers with glacial origins seem to be in the South Island. 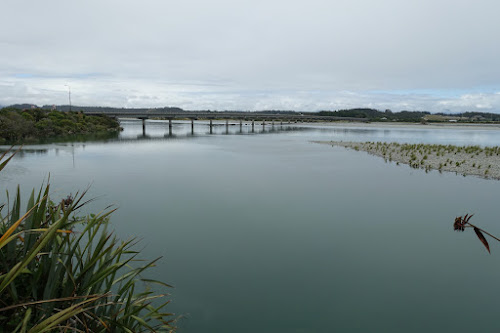 One shop I looked into was an interesting rock/ ironwork shop in the historic Bank of New South Wales. 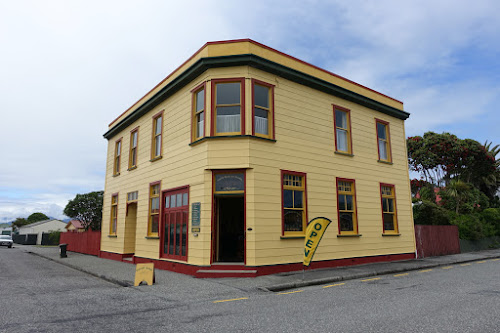 I thought of you Michèle, especially when the owners told me that a man doing historic walking tours often brings people inside, and reads them an excerpt from the Luminaries.

Down on the beach I took a photo of the driftwood sculpture that everyone heads for. It's a clever social media strategy to advertise the town really! 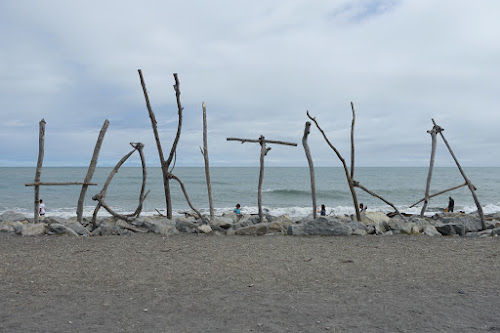 By now the sun had started shining more, and I was too hot in my morning's choice of clothing. The advantage of camping is that I had alternative options in my car, then once changed I headed off for the Hokitika Gorge. For some reason I thought the gorge was only a few kilometres out of town, but it was nearly 30. But what great countryside the road passed through, with hills and clouds looming, and farms, and trees. 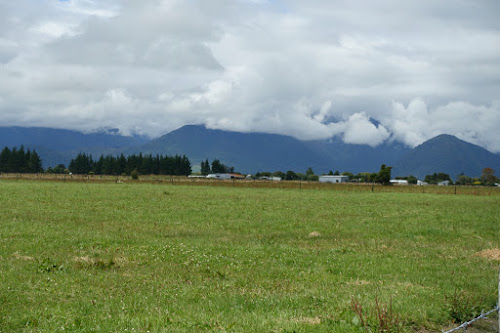 When I reached the village of Kowhitirangi, I saw one of the loveliest little churches I have seen, constructed of river stones. 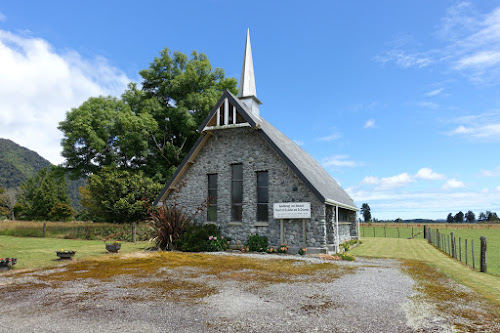 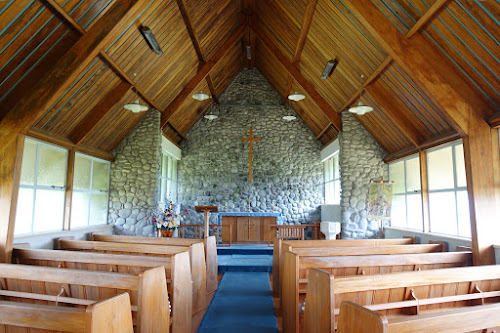 I noticed a monument down the road, and assumed it was a war memorial - but it turned out to be a memorial to policemen and home guards who lost their lives when a local resident went berserk with guns. 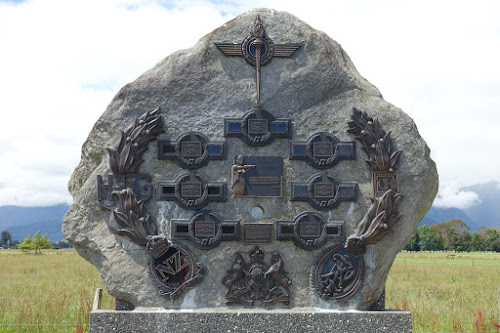 Before too long I had reached the Hokitika Gorge which is magnificent. The first bit of the walk to a viewpoint is suitable for wheelchairs. There was also a sign answering my question- 'Why is the water so blue?' And it turns out the answers are glacial rock flour and ice... 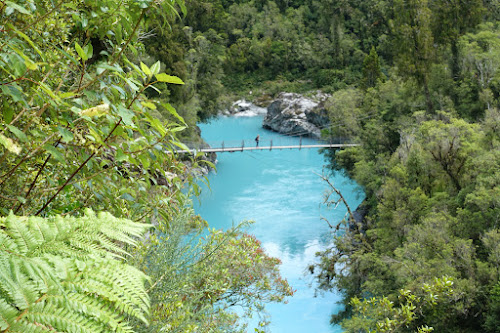 The bridge moved a bit so was a trifle scary! Not long past it was another lookout and some very large rocks where you could look upstream on the river or back to the bridge. 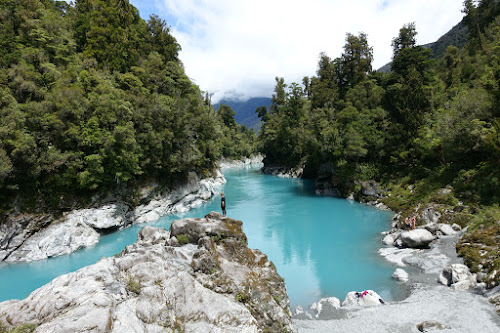 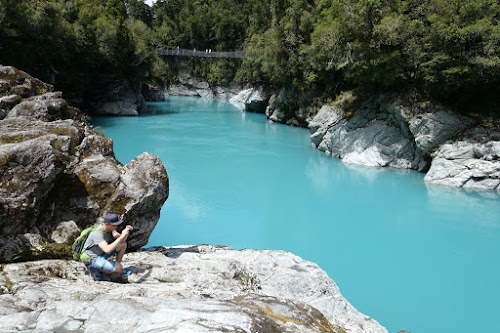 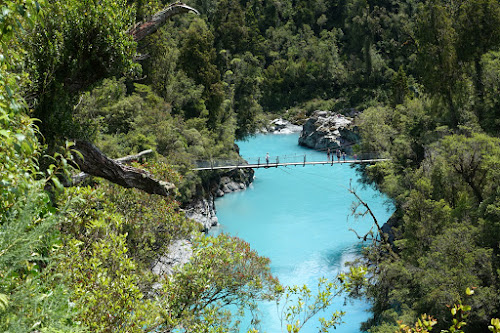 I started driving back to town, but saw some signs that led towards Lake Kaniere by an upper route. The first bit of the route was sealed and ran past farmland and towards hills. After yesterday's tour I was very aware that a major fault line was probably running not too far from where I was... 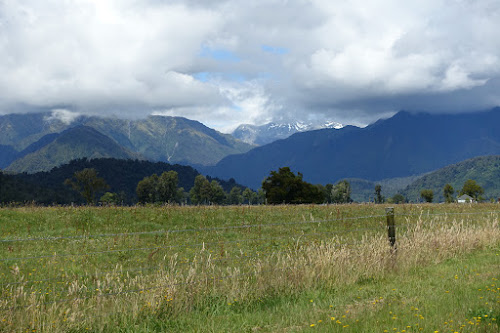 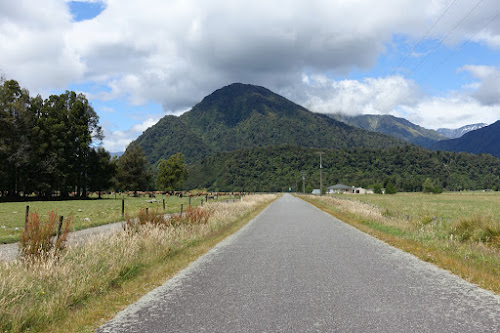 I ended up on a narrow, winding gravel road that ran through native forest. But there was nowhere to pull over for photos! The road I was on eventually arrived on the northern side of Lake Kaniere. 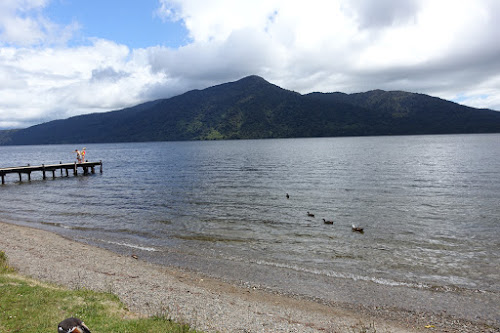 So, the end of my holiday is nigh upon me. Tomorrow I will drive up Arthur's Pass on the road back to Christchurch, then after a couple of nights with friends, I will head for Picton and the ferry home. Thanks for keeping me company on the journey!

Posted with Blogsy
Posted by Kiwi Nomad at 18:23