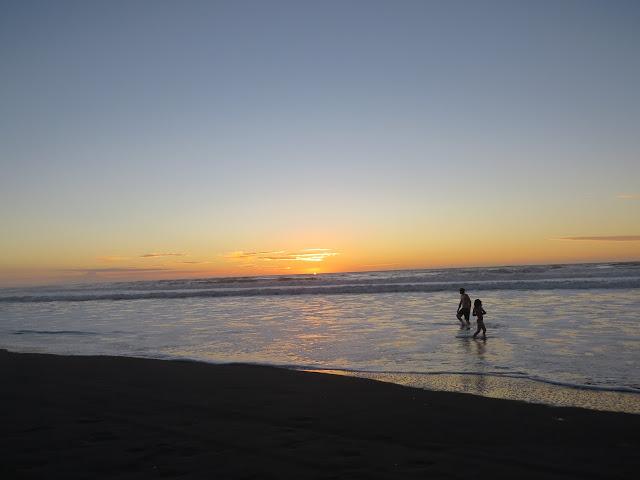 I stayed the night in my tent at the camping ground near Mokau- just the other side of the dunes from the waves. It was a place I had driven past often enough when I was a student, and I had always wanted to stay here.  It was coming up to full tide as the sun set, and I sat in my deck chair watching. I fell asleep in my tent with the breakers pounding just metres from my head. 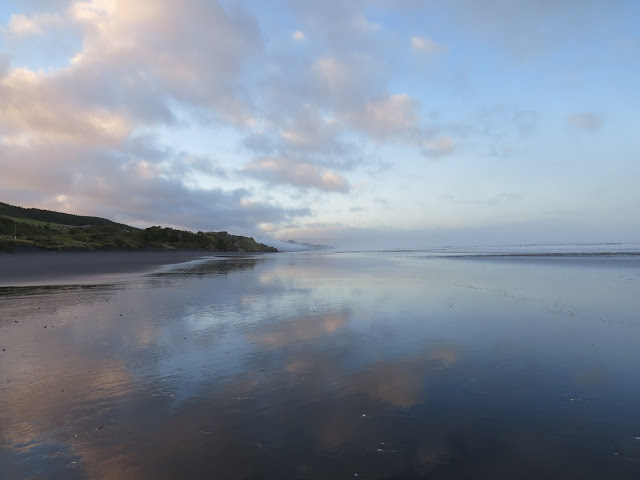 By early morning the tide was lower and I walked along the quiet beach as dawn arrived. 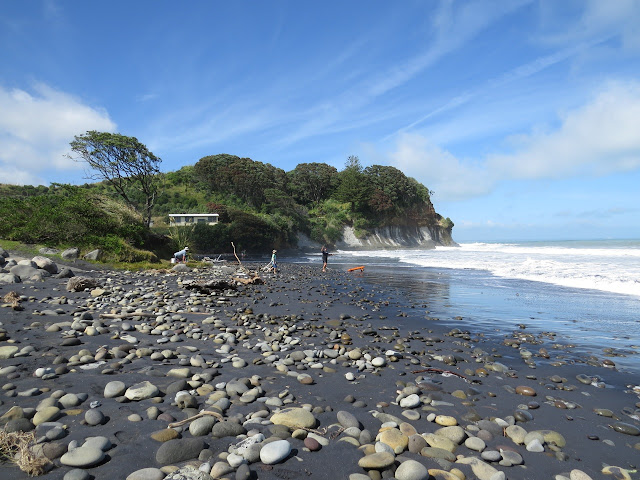 I packed up and started heading south into Taranaki. I planned to re-visit some beaches from my childhood, but I got the timing a bit wrong: high tide meant that I just had to look at them rather than walk along them. 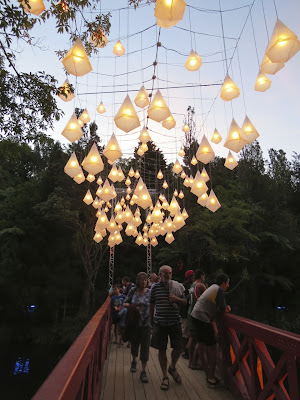 That evening in New Plymouth the plan was to visit Pukekura Park to see the lights. This wooden bridge was crowded with people enjoying the lights, but it was also a special place from my childhood: I have a photo with me standing on here when I was quite young, and I am certain most other Taranaki children have one the same. 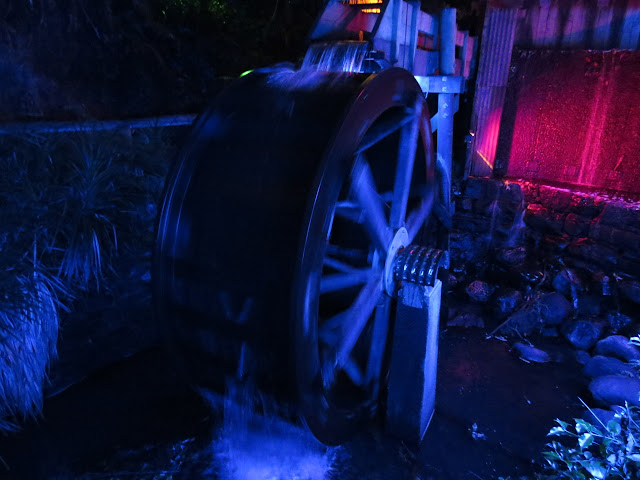 Lights of various kinds were in all kinds of unexpected places. I quite liked this eerie effect on the waterwheel. 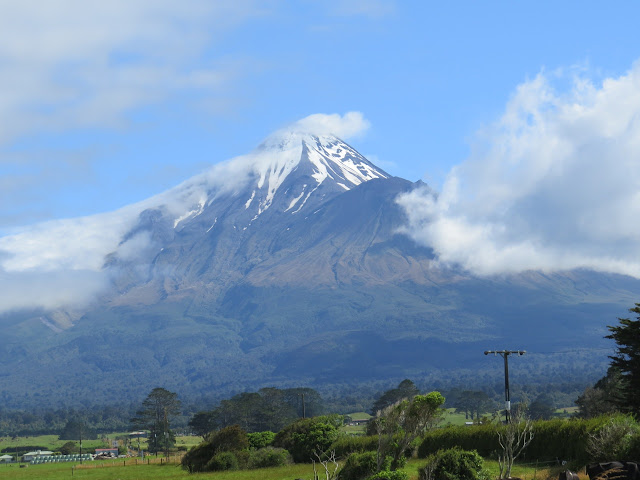 Next day in the car I explored some of the back roads in Taranaki, on the coast side. To start with the mountain was draped in cloud, but by the time I was getting near Auroa, you could see most of it poking out, with Fantham's Peak prominent from this side. 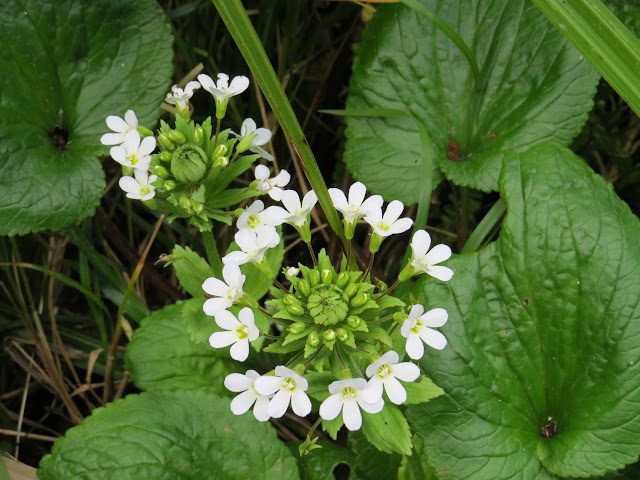 I decided to head into the national park, to take a look at Dawson Falls. We'd done a bit study on the mountain for seventh form biology, and this plant was one I remembered well. Ourisia macrophyllum is the name that seems lodged in my head. 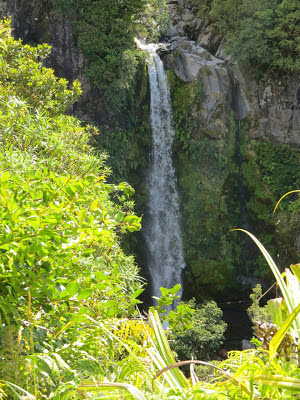 The climb down to the falls and up again seemed much harder than in my younger days. It's definitely time to get back into walking on some local walking tracks to regain my walking fitness! 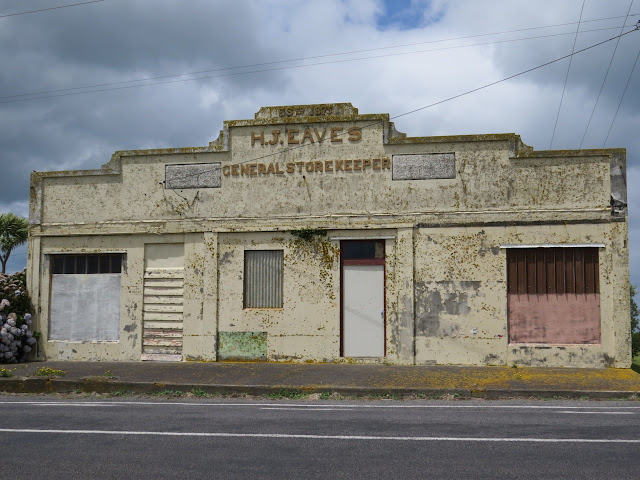 I drove back down to the coastal road for more explorations. Otakeho was the name of this village that once would have been the centre of a dairy farming area, but now is barely recognisable as a locality.

Next day it was time to head home. First stop was at Lake Rotokare, where a local group has fenced off a reserve with expensive predator fencing so kiwi can make a come-back here. There was a system of double gates for cars to come in. 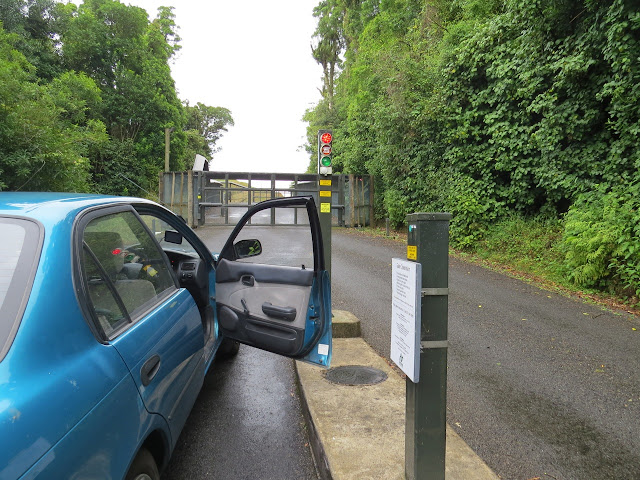 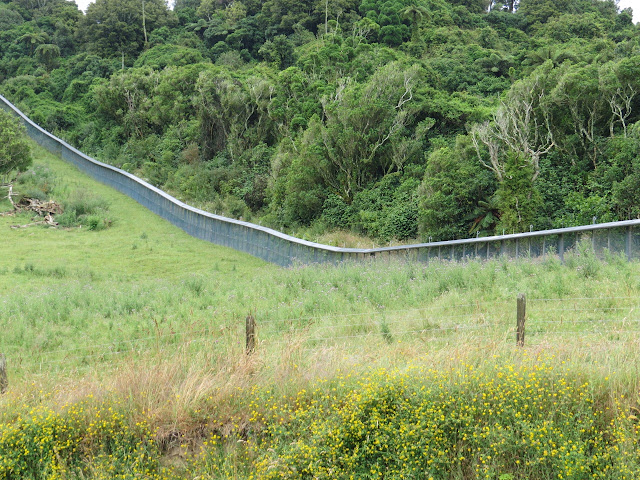 Once out of the reserve I set my GPS to give me a route to Tawhiti museum so I could see the Traders and Whalers exhibit. The GPS didn't disappoint and gave me a lovey route that had some of the grandest views of the mountain in the province. 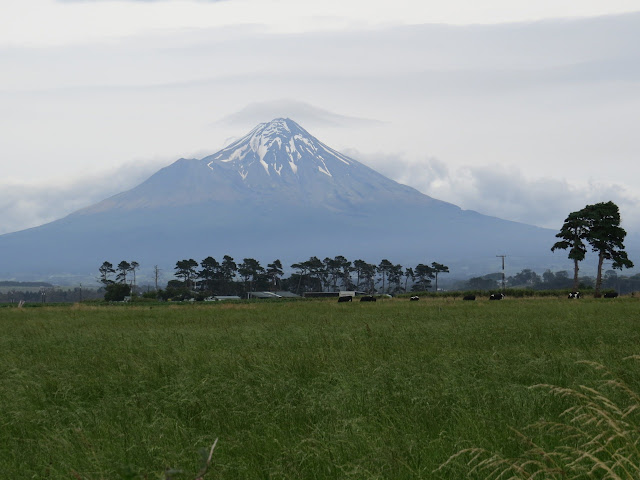 And finally I reached home again, and next day there was time for a walk in Bledisloe Park, where I discovered some of the 'secret' parts of the aboretum that I had never found before. I'll be back! 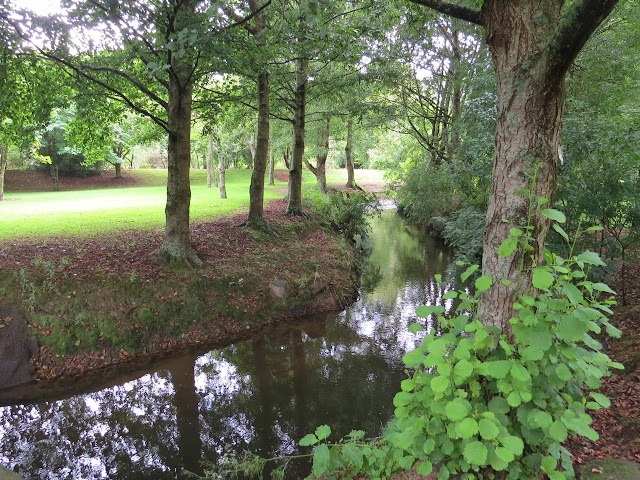 Yes, posting has been a bit light over summer. But I have been on a little roadtrip and finally you get to see some photos! 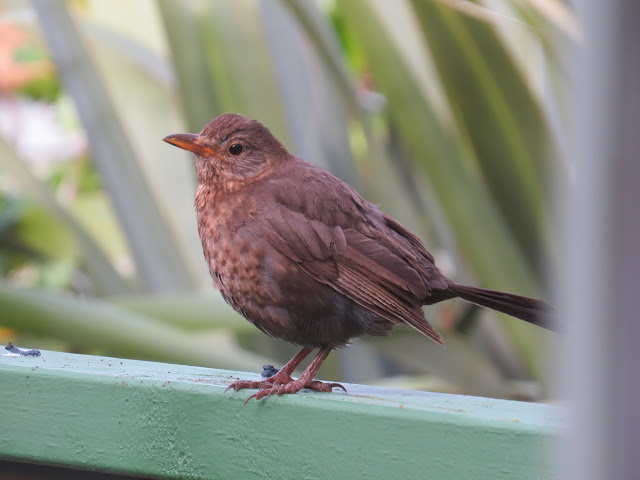 First photo is from before I left home- a freshly fledged blackbird. She sat patiently on the railing beside the deck so I could get a photo even through the somewhat dirty window of the study. 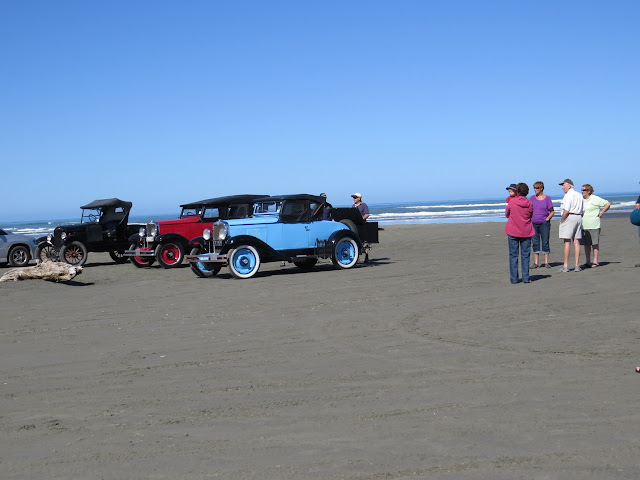 And before I took off up north I spent a morning wandering on Himatangi Beach. One of the surprises of the walk was seeing all these vintage cars turn up. They were off on a two-day rally from the west coast to the east. It was a lovely calm morning, with gentle sunshine. But before the afternoon was out, someone had drowned in the surf which seemed almost unbelievable after my peaceful morning. However, the rip currents on these west coast beaches are often quite unpredictable. 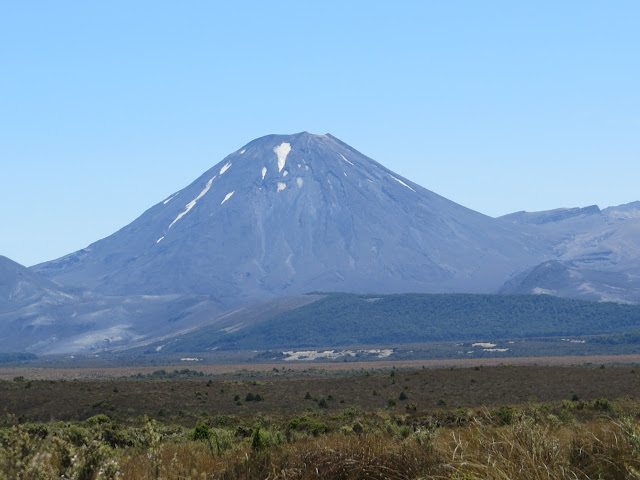 I drove up on SH1 through the volcanic plateau. It was a clear day and the views of the volcanoes were spectacular. Here is Ngauruhoe. Ruapehu and Tongariro both have raised volcanic alert levels at present, but all stayed calm, except for the smell of sulphur in Taupo in the evening. 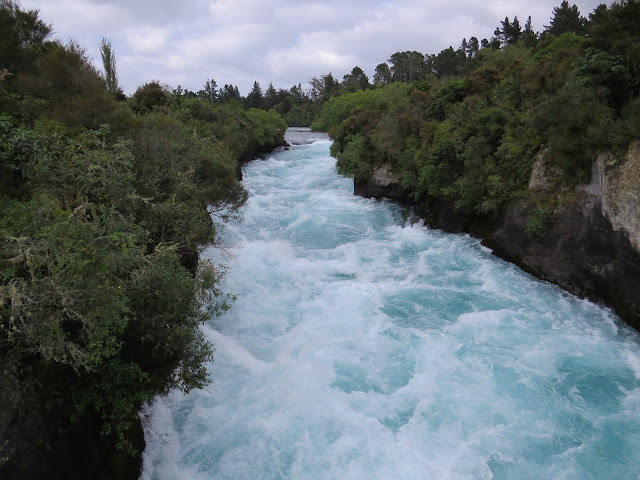 Leaving Taupo I decided I had better see Huka Falls which I keep hearing about. I think that maybe I was here once many years ago, but it may have been at a time of low outflow from Lake Taupo, and I don't remember anything memorable. But today was quite another story. What happens is that water leaves Lake Taupo- the start of the Waikato River- but soon gets squeezed in a narrow channel of hard volcanic rock. So the water passes through this channel at high pressure, and both the sight and the sound of the rushing water is very impressive. 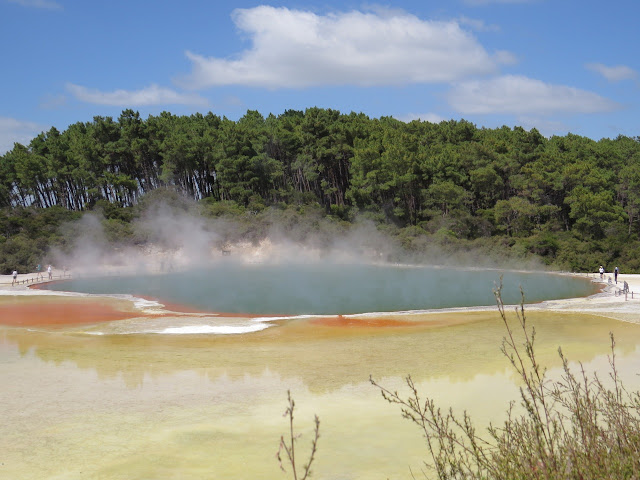 I was heading north to Hamilton but decided to divert via Rotorua to see my favourite thermal park, Wai-o-tapu. You can read more about this park here. The cost to get in was a bit of a shock ($32.50 per adult- definitely prices aimed at the overseas tourist market.) However, the colours and sights here are so impressive. The top shot is a first view of the Champagne Pool, from a distance. 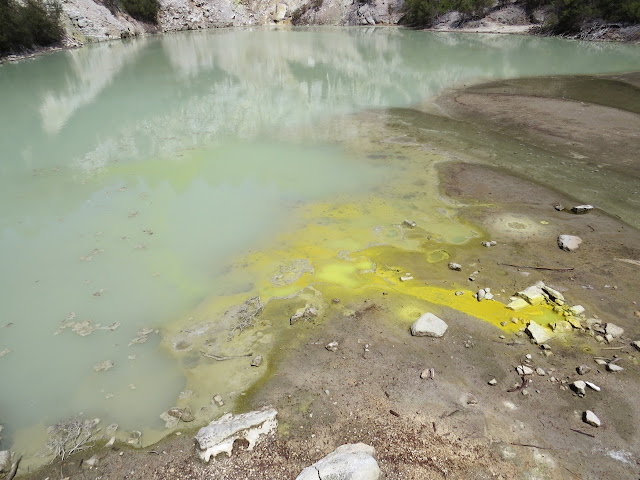 I loved the colours in this pool, the way the sulphur colour sort of looked like frying egg yolk. 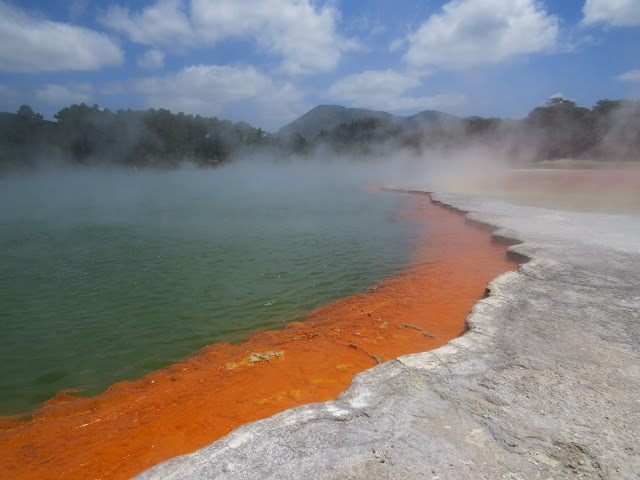 And here's the drama of the colours of the Champagne pool closer up. Before leaving Hamilton the next morning I visited Hamilton Gardens. These weren't even in existence when I left the city at the end of my student days, but a lot of vision has gone into creating them. There are a wide variety of themed gardens- and I could do a whole blog post on them. However, you just get two photos. Top one is of a feather that happened to be floating on the little lakelet in the quiet Japanese garden of contemplation. 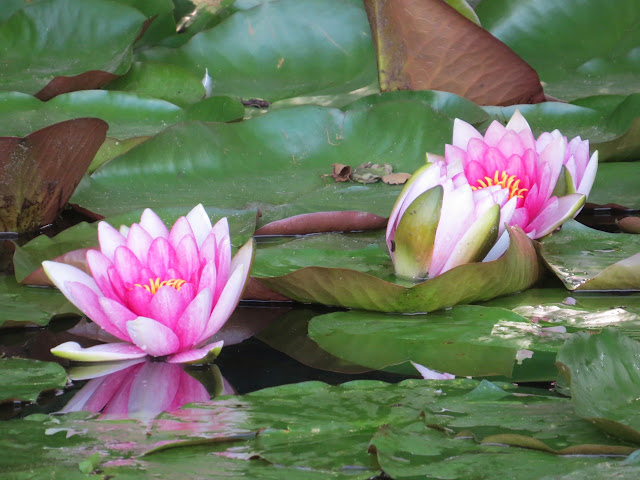 And these water lilies were in the bigger lake near the entrance gate. 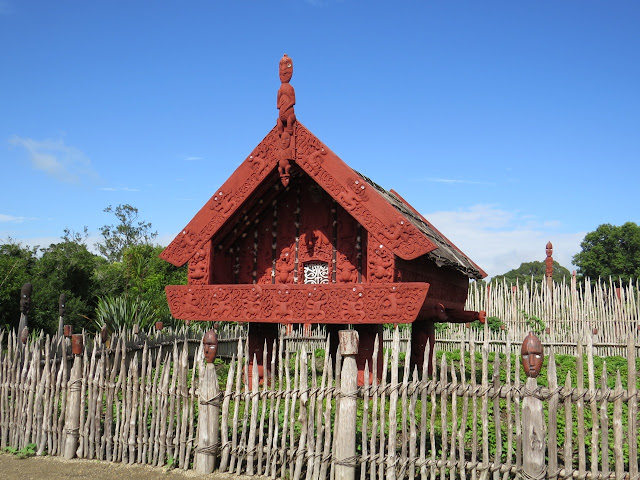 One new garden since my last visit here was the Maori garden that showed the methods Maori people had used for cultivation. In this garden were kumara which grew easily on the warmer islands of Poynesia, but here in New Zealand methods of heaping the earth up around the plants had to be developed.

From the part of the world that sees it first, Happy New Year to you all! 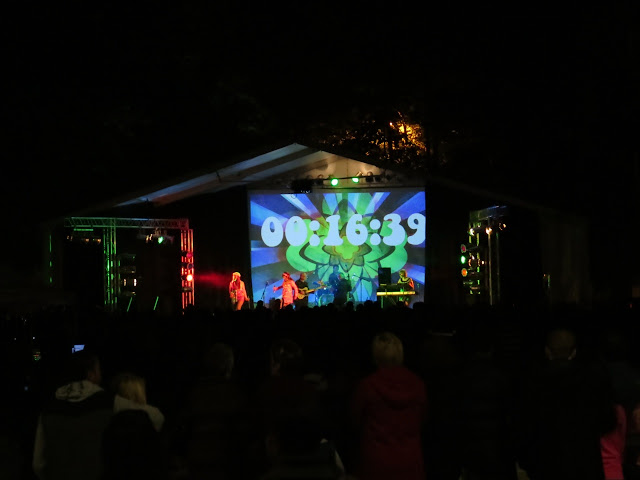 The countdown is on- the stage for the NYE concert in the Square in Palmerston North. 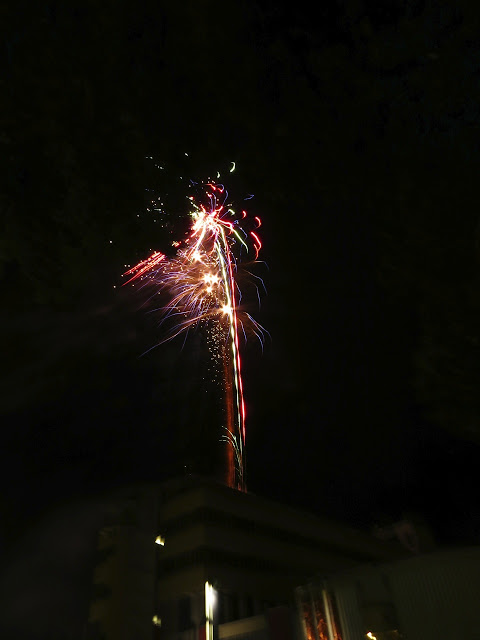 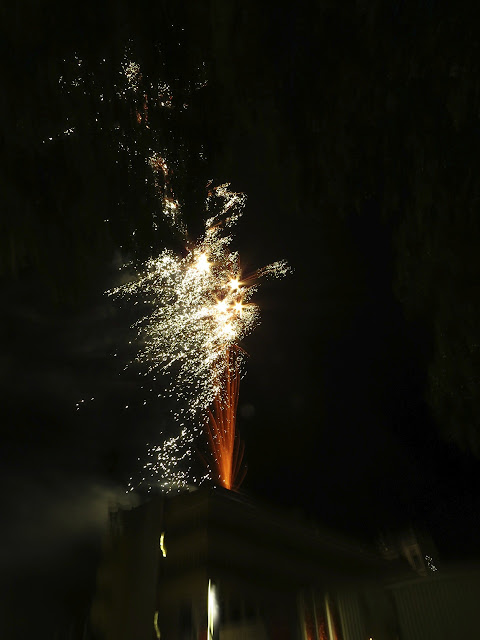 I was using the Fireworks setting on my new camera for the first time.
Loved the way it captured some stars! 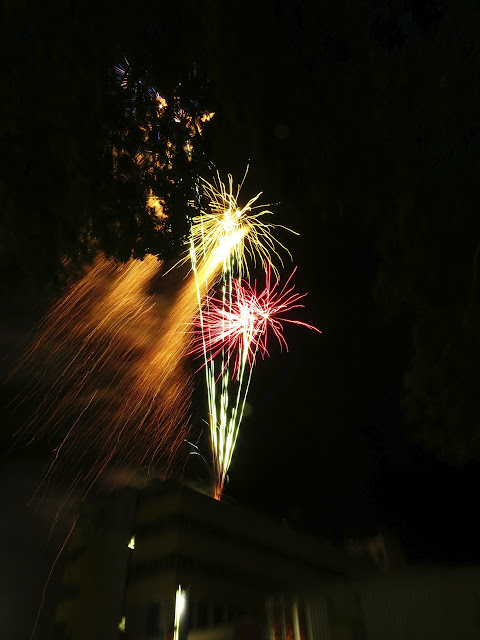