Oh dear, another interesting day with too many photos I want to share! First off, for one of my most loyal readers- Moeraki boulders with a different mood, and an explanation. 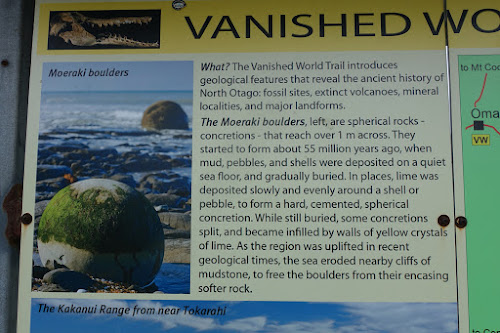 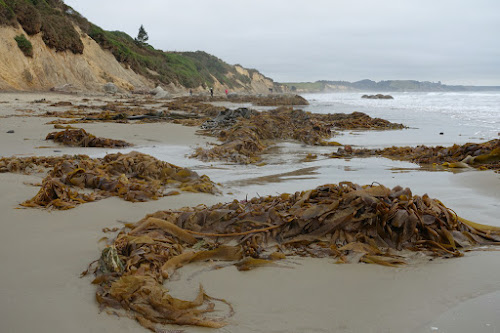 Kelp was heaped along the beach today- a result of the boisterous thumping waves I have been seeing on this coast in the last couple of days I guess. Made some of the boulders look quite small. 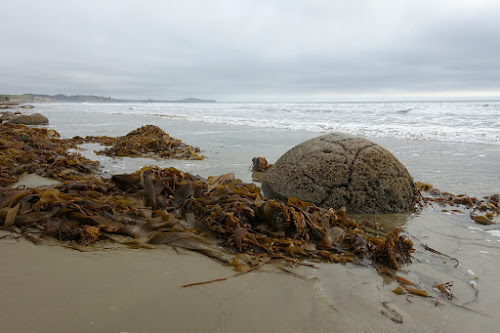 And there was a very different mood today with grey rather than blue skies. 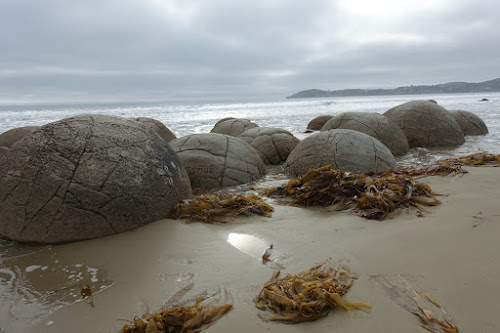 I left the beach passing a more gentle morsel of seaweed. 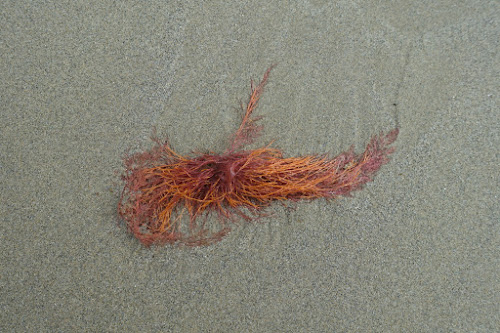 I had to stop in Palmerston of course, with quite a different history from its northern sibling. It's old gold-mining past was clear. 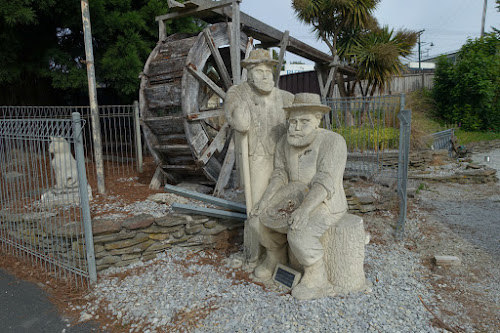 There was also this plaque explaining a prominent hilltop monument. Sir John McKenzie was originally a shepherd here, but entered Parliament, and brought about splitting the huge farms into smaller holdings so more settlers could be farmers. 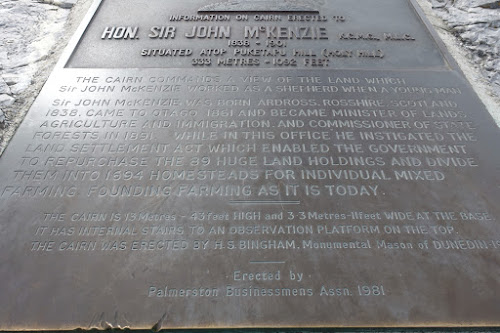 I loved seeing buildings constructed of the local mountain stone in this area, some historical and some new. It reminded me of similar use of stone I had seen in Umbria and Ticino, and parts of France. Here is an historic bridge, Bowker's, is no longer in use, not far from Palmerston. 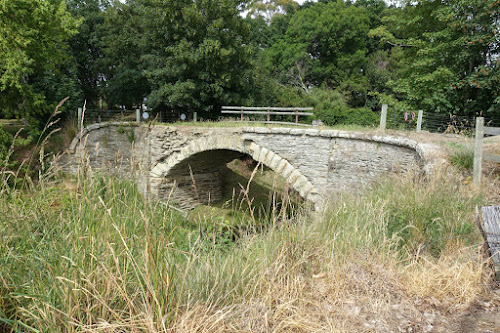 This bridge isn't on a direct route to Dunedin: once I reached Palmerston I was inspired to take a more inland route, via Macraes and Hyde. I had no idea how steep the hills were going to be, and my car went slowly up them! But the countryside was beautiful, with many rocky outcrops typical in the area. 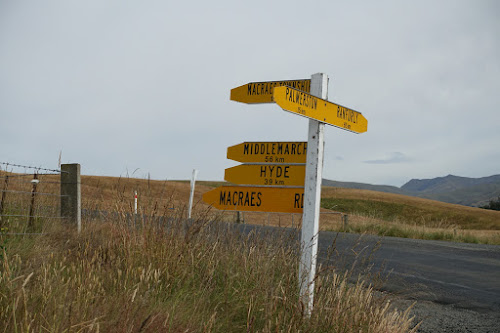 But I was in for a big shock. I was to pass the huge Macraes mine where they are looking for gold. 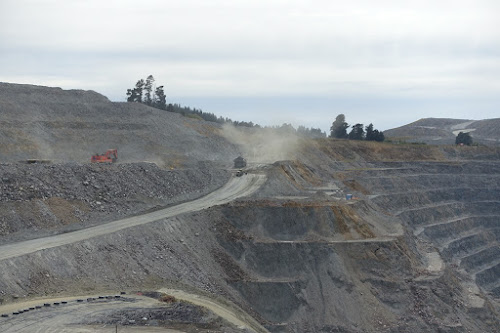 I was left feeling physically sick, after looking at the size of the gashes being inflicted on the earth. And I think the miners of days gone by at the small nearby town of Macraes would also have been aghast.

I needed some solace, and the beautiful stony landscape delivered. 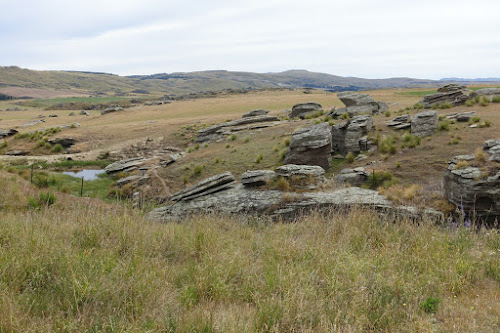 I went as far as the old gold mining town of Hyde. It has had a rebirth as a stopping point along the Otago Rail Trail for cyclists. I was left feeling somewhat lazy as the only non-cyclist present. 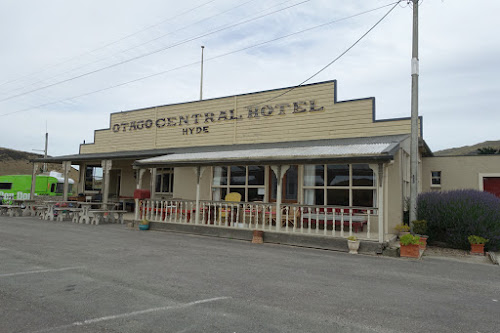 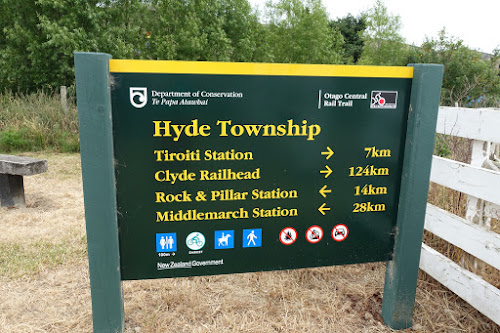 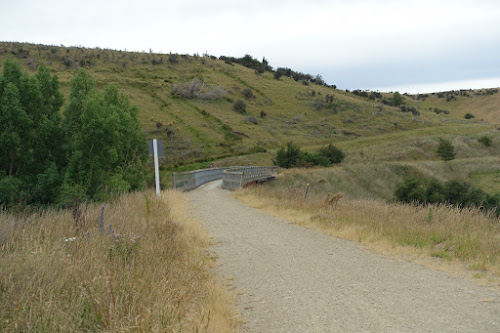 You can do this trail in style: a van dropped off people's bags for the night, so at least some were traveling light!

I'm now set up with my tent in a holiday park not far from St Kilda Beach. It was a slight shock reaching a city, and driving on a steep motorway. I now understand why snow cripples parts of Dunedin- it has some very steep hills! But what a beach they have! I paddled only with my feet though: those currents are from the Deep South. Brrrrr! 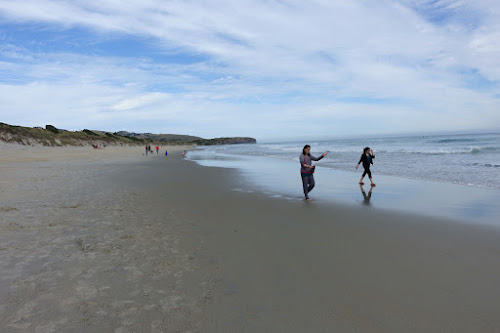 It's supposed to rain here tomorrow. I think a lazy day, with some city exploration awaits.

Posted with Blogsy
Posted by Kiwi Nomad at 10:49