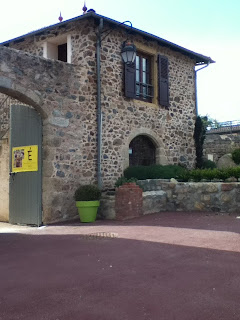 This is the lovely little gite I am staying in this evening, Anzac Day at home. I am about half way along the route from Cluny to Le Puy, in the historic village of St-Jean St-Maurice sur Loire. It sits on a promontory right on a huge bend in the Loire and they have found remains from people living here 60 000 years ago, as well as more recent groups. The route is brilliant- spectacular views- and I am certainly getting fitter with all the ups and downs.
Posted by Kiwi Nomad at 20:03 No comments:

First three days
Arrived in Cluny Tuesday evening with my friend Francis. He had reserved the first few nights accommodation for me, and was generously walking with me the first two days.
After initial climb out of Cluny the first bit of the Chemin was fairly flat and I enjoyed breathing in the experience of being in the countryside. Lots of spring flowers coming out. Also got to pat a few donkeys who were hoping for food. Quite a lot of mud so I soon had my walking pole out.

Wasn't long before we were climbing but our reward was some spectacular views.

Today - Friday was my first day walking alone, and it was a long climb up a mountain- but I was pleased to find I managed it quite well, my body getting in the groove. Met up with two German pilgrims and four French ones. Tonight I am staying in a lovely chalet in a camping ground by a lake.

There was a bit of snow lying on top of the mountain today but it didn't rain much. It's bucketing down this evening though do I hope it gets it all over and done with before morning!

Sunday afternoon in Paris
Well things don't always turn out as you plan. Turns out there was a huge political rally for Sarkozy today, at Place de la Concorde, so the Orangerie was closed!

Things all seemed like a normal Sunday afternoon when I left the restaurant. First stop was Boulevard St Germain which was crowded with people. The restaurants are all open but only certain shops, so shopping wasn't the motivation.

Next church on this walking route- that I found in some random book- was St. Germain-des-Pres, the oldest church in Paris. A historic chapel near the entrance has been renovated and looked very peaceful. The church itself is another tall, thin one so it would be interesting to know what it's acoustics are like.

I carried on walking down towards the Seine, through the fashion and art stores of the rive gauche, fortunately all closed on Sunday so I can still afford my upcoming walking stint!

I crossed the Seine and entered the tourist mecca of the Louvre area. My plan was to walk down via the Jardin des Tuileries to the Orangerie but almost as soon as I began walking you could hear cheering. It was like you might expect from a sports crowd at a big match. As I got closer it became clear it was some kind of large gathering at the Place de la Concorde and as a result the Orangerie was closed for the day.

I walked some way towards the gathering but then watched from outside a fence. Lots of people had French flags and there were blue slogans pro-Sarkozy all over the place. I was amazed as I can't recall any such gathering at home.
It all has the possibility to turn pear-shaped though I guess, and as I walked back to find an alternative metro entry point, I saw lots of police waiting at the ready, hidden in vans etc.

The trip home via the metro was quick and peaceful as if there was no such thing as a huge political rally in town.

So that's the last you'll hear from Paris. Tomorrow I have a train ticket for Montbard, where I am being picked up by F, another Camino friend. Then it's a 30 minute car ride in the countryside to his village home where I will meet his wife. Before I know it, I will be walking from Cluny!

Sent from my iPod

Sunday morning in Paris
Brrrrr this is why I packed my woollen hat. After two warm sunny days today reminds me of why I did indeed need to bring my warm jacket.

Lots of people were up early at breakfast this morning: marathon runners! But I am getting plenty of exercise walking the streets and I am being reminded of just how much exercise there is to be had going up and down stairs in the metro! Take note Trish!

I was aiming to be at St Sulpice church by 10.30 as I'd read the pipe organ then was magnificent and it was. Rest of Mass was more ordinary - I thought there might be Gregorian chant but it was contemporary led by a tenor cantor. And Kiwis note: no kneeling. At the end of Mass the organist, Daniel Roth, played for half an hour and lots of people were listening.

Before Mass I walked in the Luxembourg gardens. Lots of sculpture, and presently tulips in bloom. Runners and Nordic walkers there too but I tried not to feel guilty I was just dawdling!

I wandered while the organist played, and Fran, there was a chapel dedicated to the guy who founded the De La Salle brothers I think. He was obviously behind a lot of education efforts in France.

As I left the church more and more people were streaming in. They were obviously having some kind of celebration for Divine Mercy Sunday.

It seemed even colder when I left the church and I started keeping my eye out straight away for somewhere to eat. If there is one thing I have learned in France it's to eat when the locals do or you might miss out. And you can eat well for quite a reasonable price even in Paris if you go back a street or two from main tourist spots. Found a warm cosy place. Waiter was a bit surly to start with when I didn't want beer but seemed to recover politeness when he saw me typing this on iPod Touch. Funny.

Ok time to wrap up in my jacket and walk to the Orangerie museum which will be heated too.

Sent from my iPod

Had a really good sleep last night. It was all too exciting in Little India in the evening in the surroundings of the hotel to go straight to bed, so I had a little 'explore'. By the time it was 9pm Singapore time (1am Kiwi time) I was well ready for bed, and was soon slumbering soundly. Typical of my jetlag history, I woke at 2.30am, my usual bedtime back at home. But I was really pleased to find that I was able to doze off again- something that often eludes me when jetlagged, and woke just in time to watch the sun rising over all the buildings outside my 14th floor room. There is a Hindu temple right below me. Stunning view I have.

The weather was fine when I woke so I worked out which of the free entry tickets I had that I might use. Choices choices. I was able to use the SIA stopover bus for free too, but my hotel being right near the end of its first circuit it was going to be 11am nearly before I could get anywhere. So I took a few back streets to the Little India MRT and was pleased to find I could still work out how to find my way places on an underground system: I'll soon need that skill again on the Metro.

It had become very warm and humid, so I was sweating by the time I had walked the 300m or so from the MRT stop to the Singapore Flyer, my attraction of choice. But oh it was worth it. The capsules go around very slowly and it takes about half an hour or so, so you get plenty of time to look at things. I was in the capsule with two women from Russia and two men from Denmark, so feel I am truly entering the realm of the international traveller. The wheel doesn't 'stop' as such, but you step on while it keeps moving very slowly past.

The fascinating thing being up there was that you could see a thunderstorm developing very quickly. From just slight cloud at the start, the skies soon became very black and threatening. Sure enough, just as I was about to board the bus again, there was a huge clap of thunder, like a gunshot close by. Wham! So, some of my plans changed and I watched the rain coming down as I sat on the bus....

I got brave and decided to get off at Chinatown though, and brave a bit of wet. Of course it is so warm, you soon dry off. Will be a shock to hit the low morning temps when I reach Paris in the morning! Had a wander and lunch in Chinatown. Next stop was to see a little bit of the Botanical Gardens, then I wandered back through a different bit of Little India,

Am about to go check out the hotel swimming pool and hope it is good. Then a shower and a rest before going to the airport... All good!

Email ThisBlogThis!Share to TwitterShare to FacebookShare to Pinterest
Labels: getting there 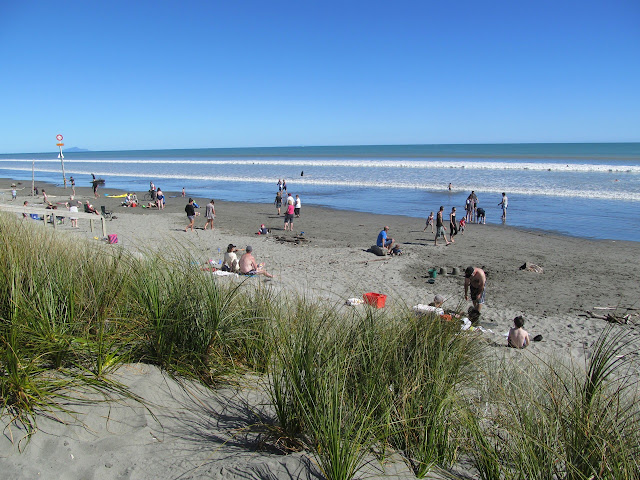 What a stunning day today for Easter Sunday- almost makes up for the many grey days of summer. There were crowds of people out on Foxton Beach enjoying the sunshine and the waves.

And for me, it was another 'farewell' for a few months. Strange to think that this time next week I will be in Paris.... It's forecast to be raining there when I arrive so don't be too jealous!
Posted by Kiwi Nomad at 17:19 8 comments:


I feel the need to grab it in both arms- as when I return home in July, we will be in the depths of winter.


And it still seems almost too strange when I think that next week I will see some beautiful blossom trees... springtime in Paris...
Posted by Kiwi Nomad at 13:58 2 comments: