Today I decided to take a wee roadie up the Pohangina Valley along some of the Manawatu Country Road.  From Ashhurst I headed north until the turn-off right for Totara Reserve. After a bit of exploration at the Reserve, I headed north some more along the Country Road as far as Umutoi. Next I back-tracked to take the metal road towards Makoura Lodge, but at the Pohangina Rd turn-off I turned left and headed south again. (There are quite a few 'options' on the Country Road, though this last metal section is not highlighted.) I finished with an ice-cream from the dairy in Ashhurst, long a known haunt of trampers- not that I had done much even in the way of gentle walking!

And now for some photos from the journey. 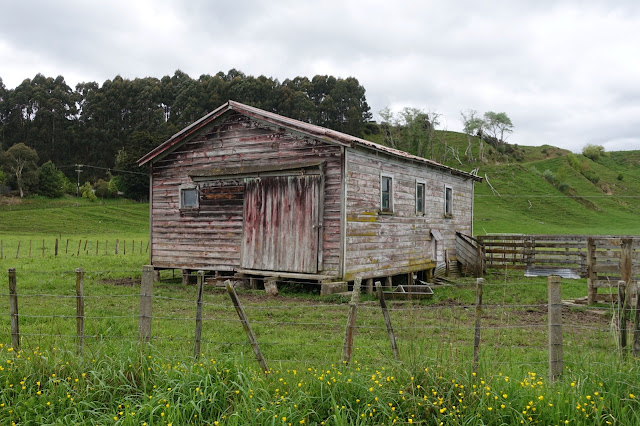 This country route is a quiet one, with little in the way of road traffic, (though I saw a few brave cyclists, fully laden with camping gear, heading north uphill on the metal sections of Pohangina Rd.) There are still many old barns that catch the eye as you pass, and they made me think of inhabitants in times gone by. 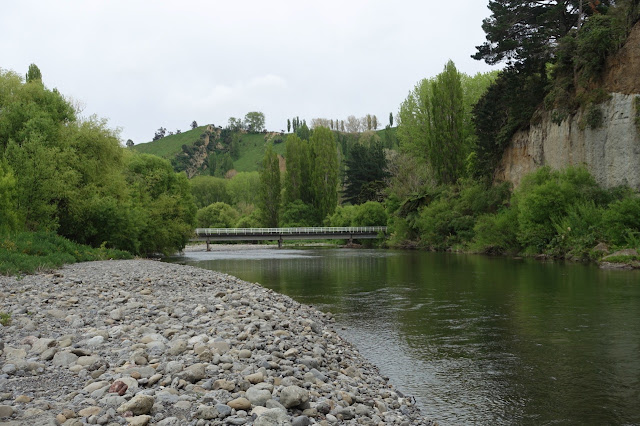 The Pohangina River is never far away in this whole area. I had a bit of a nosey around Totara Reserve, in case I decide to take a weekend camping break somewhere local over the summer. It was surprisingly calm and free of wind there. I did see a couple of families with children squealing over an eel caught in their trap- but they were putting it back in the river as it was too small. But yesterday they apparently caught a big one! 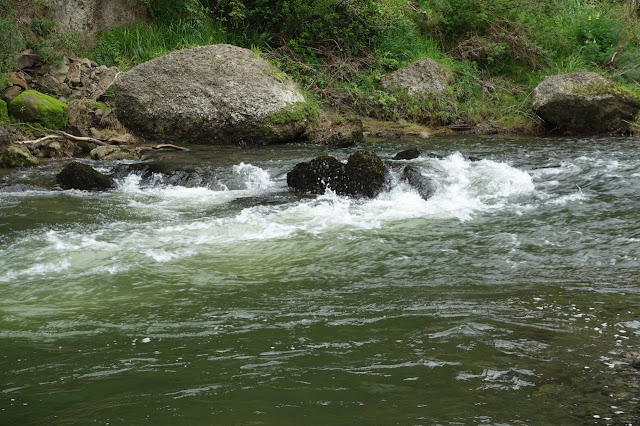 This wee 'rapid' was in the Pohangina River. The cliffs near here make swimming too dangerous at this spot. Sadly some children died when some of the cliff face collapsed one summer evening a few years back.
Seemingly you have reached the 'middle of nowhere' when you pass Komako Church- but the grounds are kept immaculately, and an Anglican Service is still held here 2-3 times per month. 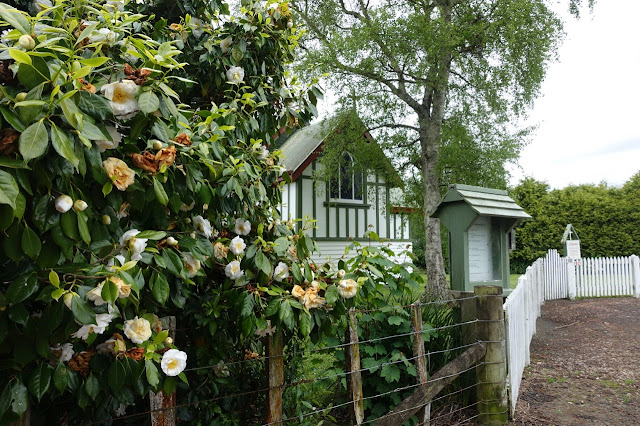 On my return journey driving down Pohangina Rd from its northern end, I truly did feel like I was in very isolated parts. The road was narrow and winding, and I was hoping I never met an oncoming vehicle. And I did have reason to hope at one point that I hadn't repeated my West Coast Incident and ventured onto a cycle track! But all was fine! 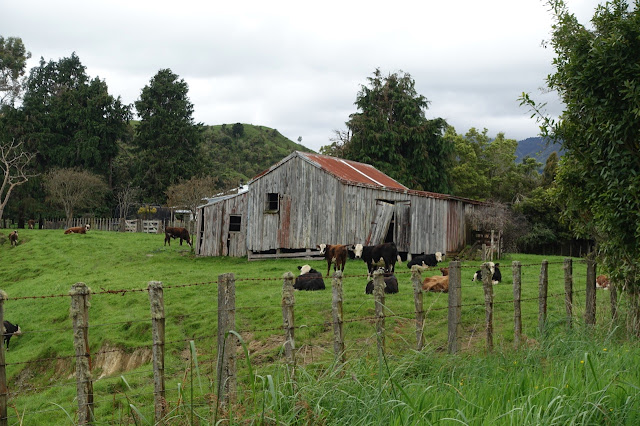 This might not be a road that we city dwellers venture along often, but there were lots of sheep, lambs and steers to let you know farming families were close near by. 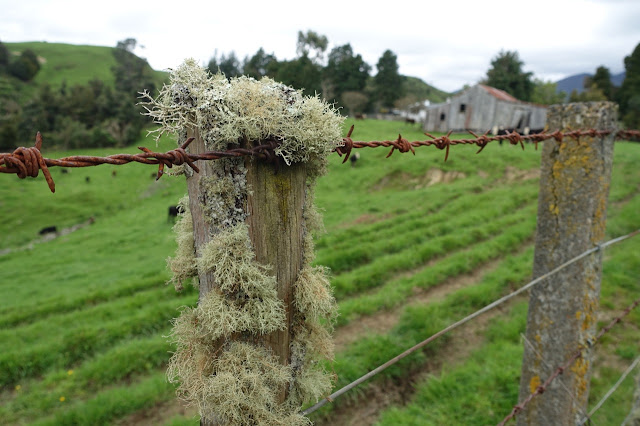 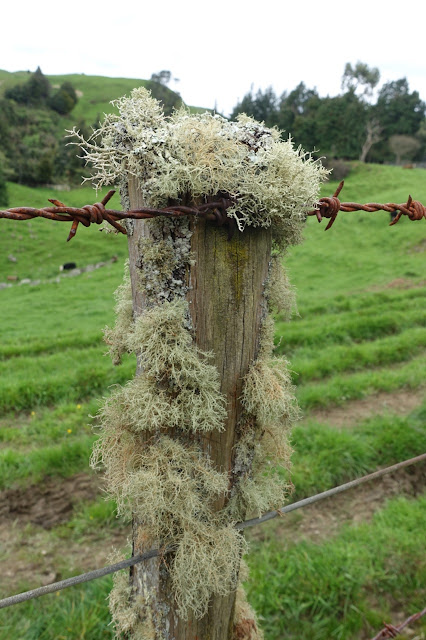 The countryside up in the Pohangina Valley is quite magical. The hills have all kinds of shapes, and often you are traveling up a steepish hill, only to come down again soon to cross a bridge over the next stream. 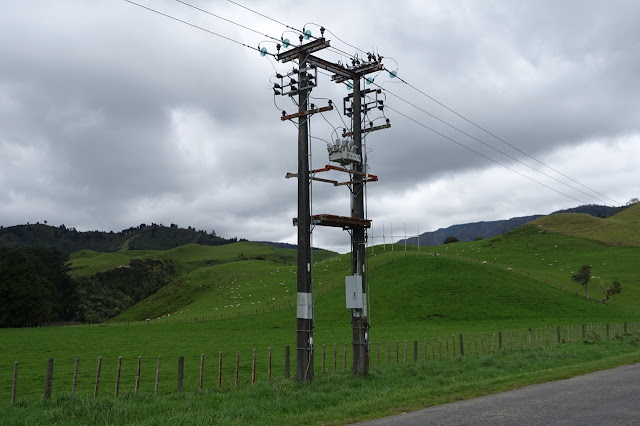 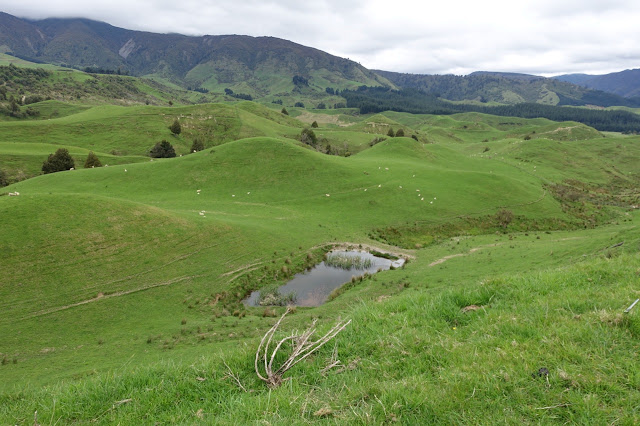 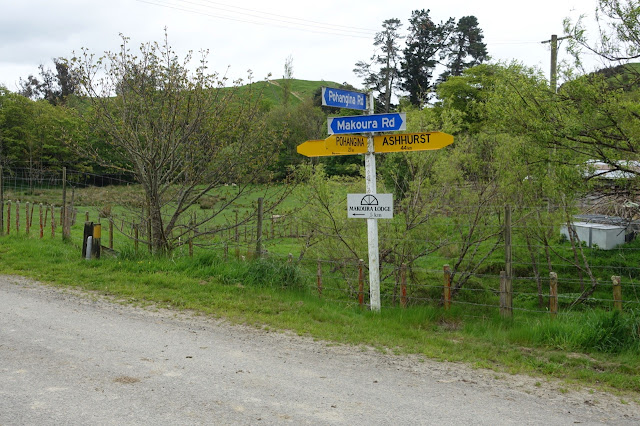 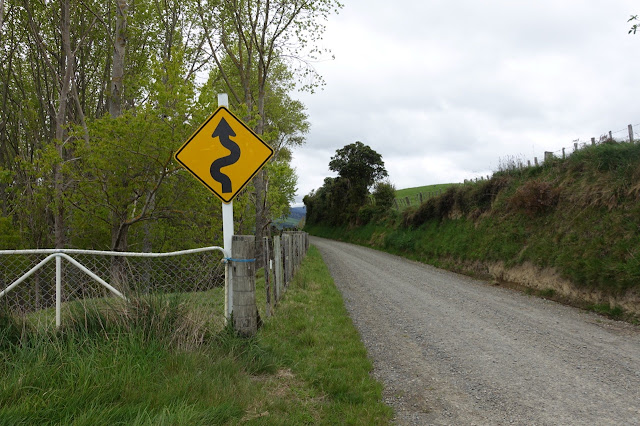 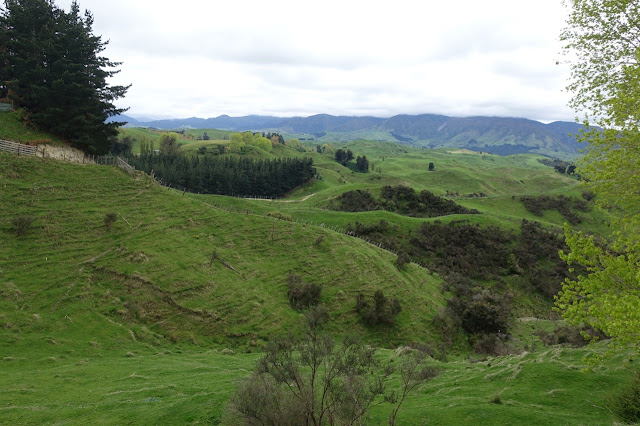 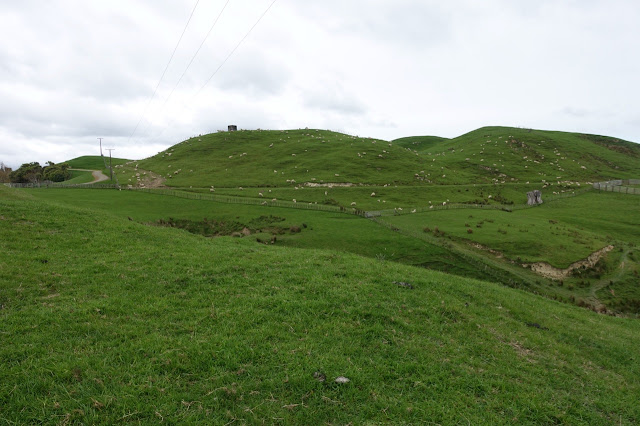 The noise from this last hill was horrendous. I thought the lambs and ewes must have been separated for weaning, but no, they were still together on the hillside. (Maybe there was a sheep yard hidden nearby that the noise was coming from).

It was strange to come back downhill again onto a wider, sealed road. I had been 'in the wilds' and then I was returning to 'civilisation'. My break from city life had only been a brief illusion after all.
But I must come back again soon. There are more old shearing sheds to be found... 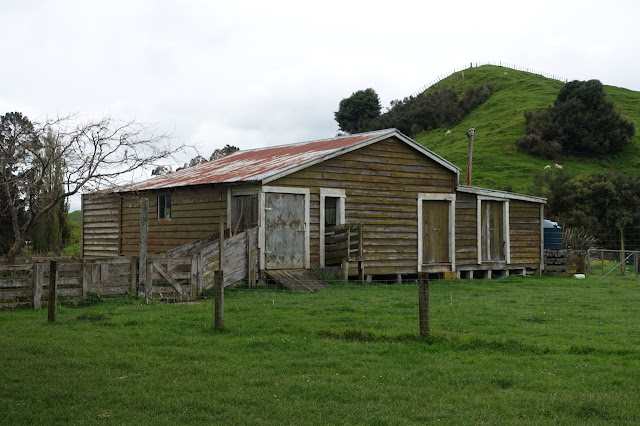 During the week I had read about the jellyfish 'invasion' on the south coast in Wellington, but I wasn't expecting to see zillions of them at Himatangi Beach this morning. Lying everywhere were these stranded jellyfish of a kind I hadn't seen before, though every so often there was a large bluebottle in their midst, complete with stinging tentacles. For once, I left my sandals on for the whole beach walk. 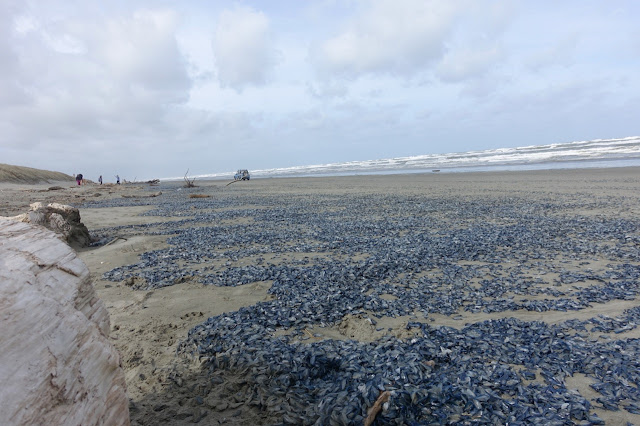 Back home I found an article in the Taranaki Daily News that described them up in New Plymouth. Apparently they are smelly, but as I have a cold still, I couldn't smell them! 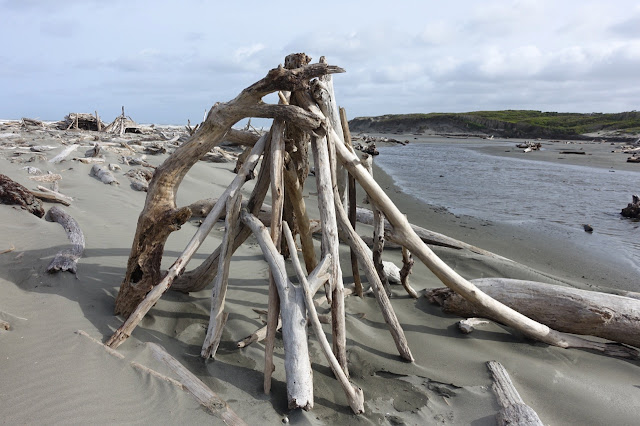 It was a very windy day at the beach, and the first stretch of the walk down to the water was harder than usual as so much dry moving sand had been banked up on the usual 'road' down to the water. Heaps of driftwood had been blown back up the stream to where they had installed posts to stop it going any further. A couple of hardy whitebaiters were installed by the mouth of the stream. 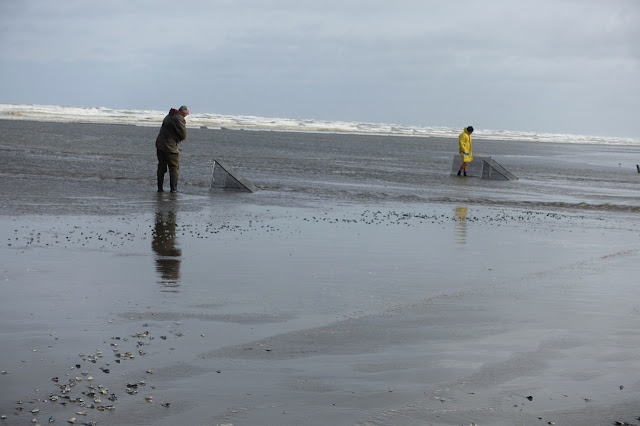 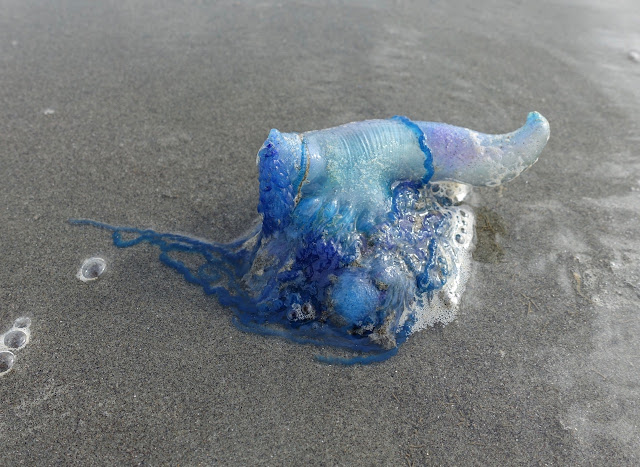 There were a few large blue jellyfish on the beach, 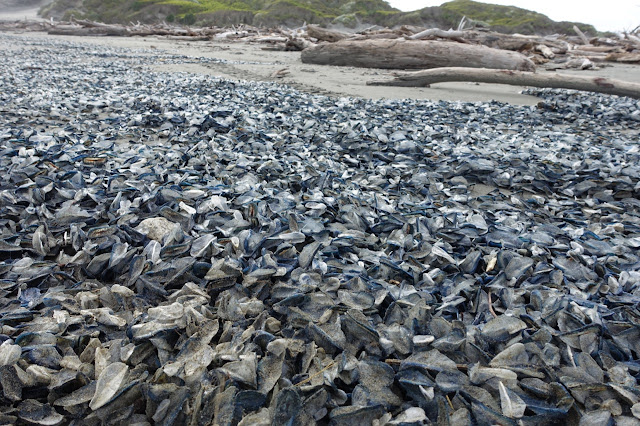 but mostly it was these smaller creatures that had become detritus at the high tide mark. Their distribution was variable- it seemed to depend on how the waves washed in. 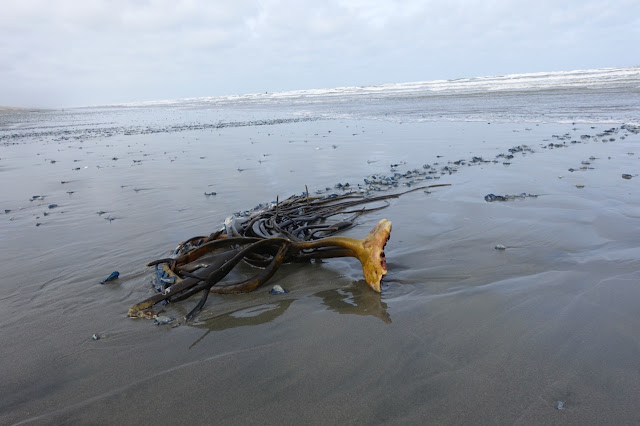 There were mainly jellyfish of the by-the-wind sailors or velella kind, that don't sting, and there was also a small amount of seaweed on the beach. Here is a piece of kelp, not so commonly washed up on this beach. 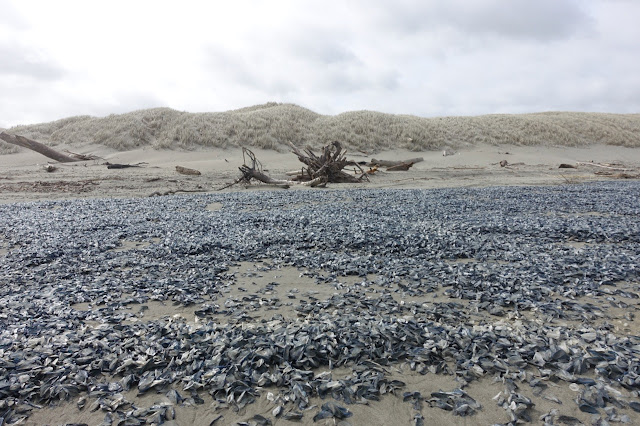 In some places by the high tide mark they were absolutely prolific- and I found it hard to select a driftwood log to sit on for a wee rest before I walked back... 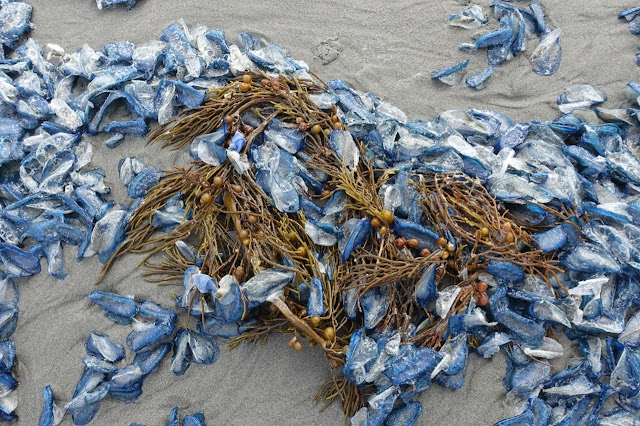 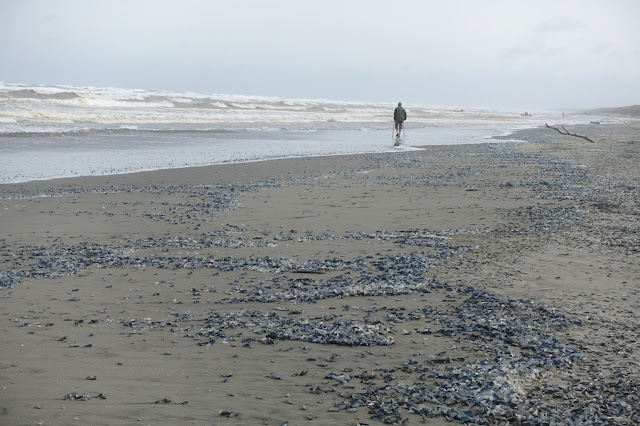 As I sat on a large log high up the beach, an old man started picking his way over the sand dunes, then down onto the beach, using his two walking sticks. I guess he lives nearby and comes down here everyday. 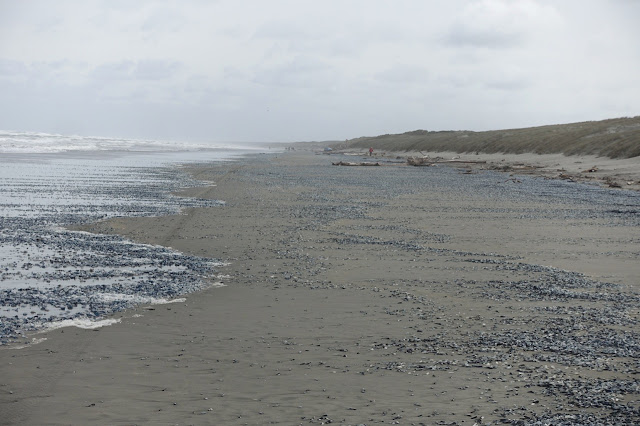 As I walked back along the beach, the tide was coming in quite quickly. The gap between the jellyfish borne on the waves, and the jellyfish left lying high up the beach by the last full-tide, was growing quite narrow. 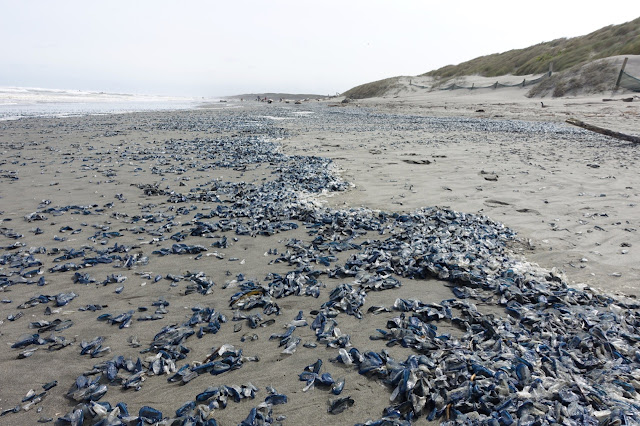 This beach is always different- affected by the wind or other weather in some way.  I wonder how it will look next time?