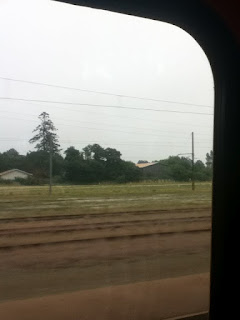 Well, I am back in the south of France, after an all night bus trip across northern Spain. Surprisingly, the skies here in Les Landes are grey and misty, after all the blue skies in Santiago!

And as a fellow-Camino-ite on the bus commented, that was even worse than a night in an albergue! The bus itself was supremely comfortable and the driver excellent, but there's nothing worse than listening to other people snoring away in their seats while you remain wide awake!!! Finally I dropped off for an hour or so near Bilbao.

St Jacques was looking after me for the onward train connection. The bus arrived at 7am at Irun, and the first train left from Hendaye at 7.33am. I went from the bus stop to the Irun international train counter. No departures imminent for France. Asked at info counter how to get to Hendaye. Man gave me map. Turns out it was for a wee train that went across the border. Next wee train departure 7.18am. Not looking good for that Bordeaux train. But wee train only took 5 minutes. No queue at Hendaye ticket counter. Lady looked rather taken aback that I was wanting a ticket for that TGV already on the platform, leaving in 7 minutes. Ticket in hand with five minutes to spare! It was full and supposedly I would be standing in the corridor. But as I got on at the first station, I scored a little fold down seat for the trip.

Now I just need to make sure I don't fall asleep and miss the Bordeaux stop and end up in Paris!!!
PS got off in Bordeaux OK. Have set alarm to wake me before Agen!
Posted by Kiwi Nomad at 21:13